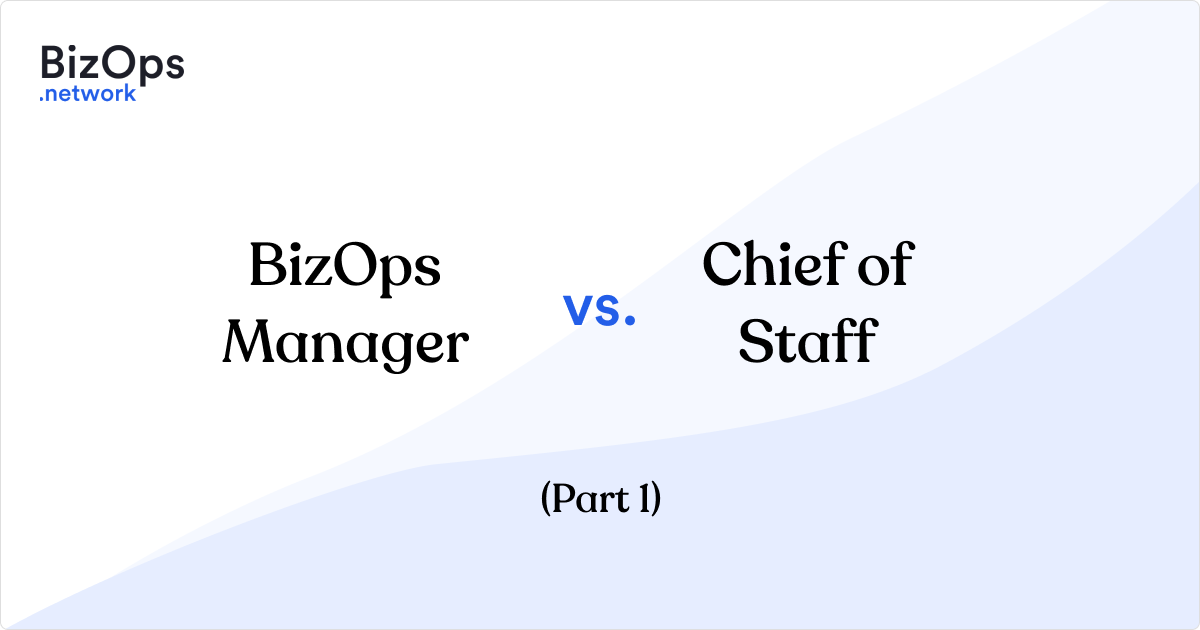 Companies going through rapid phases of growth in increasingly complex environments need executives with the right support team around them to succeed.

Until recently, the executive or administrative assistant was the core support arm for most senior leaders. Today Senior Leadership Teams (SLT) surround themselves with talent that can work cross-functionally to support departments, triage challenges, and lead strategic projects important to the company’s long-term vision.

Two standout roles that have emerged in this arena are the Chief of Staff (CoS) and the Business Operations Manager (BizOps). While both positions draw in top-tier talent with diverse and predominantly generalist backgrounds, there are some unique differences in their functions within organizations, skill sets required to excel in the position, and the potential career paths each role unlocks.

So what really is the difference between these two roles?

What is a Business Operations Manager?

What is a Chief of Staff?

Chiefs of Staff work closely with a senior leader (typically in the C-Suite) to help make their time, information gathering, and sharing and decision-making more effective.

Chief of Staff: Focus on the Principal

The primary difference between CoS and BizOps is how their time is leveraged. A Chief of Staff’s primary focus will typically be ensuring the success of their Principal. Because of this, the most common archetypes for the Chief of Staff role are all oriented towards their Principal:

Naturally, the priorities of the CEO aren’t always aligned with the directives given to the rest of the organization and a Chief of staff is meant to bridge this gap. For example, a Chief of Staff at a startup might be responsible for fundraising. Money-raising activities are a priority often assumed by the CEO, critical to the company’s success and unlikely to place a large burden on the majority of the team. A fundraising process can, however, require a huge amount of time and attention from the CEO. A CoS provides leverage and support to their CEO by helping to create pitch materials, manage investor communications, and more.

Marc Mercier, Chief of Staff at the open-source chatbot startup, Botpress, works as a CoS with a heavy focus on business operations.

“The CoS role differs from BizOps in the sense that you are not managing operations for the business but rather the principal (the CEO in my case). As a CoS, I am doing a lot of communication for my CEO, pulling data, doing follow ups, managing projects, structuring the operating cadence of our exec team and more.” - Marc Mercier, Chief of Staff at Botpress

A Chief of Staff may assume responsibilities that appear more organization-focused as well. Managing a company-wide OKR process is a great example of this. And certainly as a Chief of Staff grows in their position and takes on new levels of responsibility, their scope often extends further into the organization, rather than being solely Principal-focused. This does not, however, remove them from the orbit of their Principal.

Business Operations: Focus on the Organization

Business Operations takes a slightly different approach to cross-functional challenges. Their priorities will shift depending on what the organization needs most at any given time (usually determined by the CEO or another member of the SLT). Business Operations teams tend to take on the role of  internal consultants, with the ability and permission to dive into any team to help managers execute an important project, leverage data to make decisions, or build processes.

Business Operations typically acts as an independent function that may ladder up to the CEO or occasionally serve another department (finance, marketing, etc) directly. In the department case, there may be multiple business operations managers or teams that work independently from one another. The types of projects are also typically more focused on challenges faced by their particular business area vs the whole company.

When BizOps Managers report to the CEO or sometimes even to the CoS (as suggested by Executive Coach, Matthew Mochary), the role can closely resemble a Chief of Staff. In fact, according to Scott Amenta, founder at Chief of Staff Network,

"data collected by the Chief of Staff Network from nearly 800 Chiefs of Staff shows 60% of them define Business Operations as one of their three key focus areas."‍

At the end of the day, while there are some differences in the two roles, individuals in both roles succeed when they have the ability to understand the strategic direction and priorities from members of the SLT while operating fluidly across departments to simplify projects, build processes, and execute.

According to Roland Yang, Head of Business Operations & former Chief of Staff at the cyber insurance startup, At-Bay

"leaders in both roles often work without direct authority on or even a dotted line to other teams, and rely on influence instead to succeed."

What else makes these roles different?

Let’s look at specific types of work often carried out by Business Operations and Chiefs of Staff and how the two roles approach them differently:

At the BizOps Network, one common trait we’ve noticed among a top-tier group of Founding Members is a strong focus on making company data actionable. Business Operations Managers help department heads make better and faster decisions using data as a key lever of influence. As a company scales, moving from anecdotal evidence to data-driven decisions can be a tough transition, but a strong Business Operations team can help department leaders define their key metrics, create dashboards, and build data fluency within an organization.

As such, BizOps Managers often come from a strategy and analytics or business intelligence background. They may be skilled with SQL to query relational databases and BI tools like Tableau and Looker to collect and visualize key company data.

“The Biz Ops team closely resembles a functional leader and can become the source of truth and the arbiter for understanding how the organization is performing. Chiefs of Staff play that role less often since they are more removed from data as a day-to-day mandate.” - Roland Yang, Head of Business Operations, At-Bay

It’s generally less common to see Chiefs of Staff with these sets of skills, though that is likely to change as organizations become even more data-driven and tools become easier to use.

Both roles often find themselves as the traffic cop at the crossroads of cross-functional projects. As companies grow, information silos, internal politics, and misaligned incentives can stop important and necessary work from getting done. An independent BizOps Manager or team can help to create the right communication patterns, protocols, processes to help growing teams execute well together.

Chiefs of Staff typically take a different approach to these cross-functional projects. While they may occasionally own special projects that don’t have a natural owner, they’re more likely to coordinate between the CEO and a department leader, for example, to ensure priorities are properly communicated and projects are on track rather than diving into the nitty gritty execution work of actually completing the projects themselves.

There are hundreds of tools to choose from to make project management, data visualization, internal communications, and other important functions effective, but choosing the right ones can be difficult and implementing them effectively can be even harder.

BizOps can play a role in helping departments identify the right tools for their particular objectives and supporting the implementation of this software to aid with automation of recurring tasks or to build connections between systems used by other departments. Particularly with the rise of no-code infrastructure like Zapier, Bubble, Integromat, and more, custom apps and automations can help alleviate pain points felt by under-resourced teams. Business Operations can be at the center of those efforts.

Chiefs of Staff may also be involved in some of these tool procurement processes, usually related to products used by the whole organization (e.g. OKR management, People Ops software, communication tools, and more). They are typically less hands-on in the implementation of these tools between teams.

A Chief of Staff is also commonly responsible for building (and maintaining) the operational systems that help define the company’s working behavior, communication, and culture. Examples may include SLT meetings, cross-department alignment meetings, team-wide all hands, along with various frameworks, systems, or processes the organization might use to establish a consistent rhythm in how they conduct their business. A great example of this function put into practice is Kevin Fishner’s playbook on the first 10 systems that have helped HashiCorp scale.

There is some overlap here with work that an effective  BizOps team can be responsible for, but this is usually more core to Chiefs of Staff.

A Chief of Staff can sometimes assume responsibilities as a stand-in for teams that require additional management or support. For example, a Chief of Staff may take over the People Ops functions, particularly recruiting, at smaller organizations. While it’s typically a mistake if this continues for too long, the CEO’s trust in the CoS can help them execute on this work effectively. It is uncommon to see a BizOps Manager take on these roles directly, but occasionally BizOps may be responsible for incubating new functions. In these instances, BizOps would set the goals and roadmap, build the processes, and hire the initial team before rolling it out into the organization as a standalone department.

The differences between Business Operations and Chief of Staff day-to-day responsibilities are often subtle. The tradeoffs between organizational focus and a focus on their Principal’s success set the foundation for how operators in both positions think about their key objectives and success metrics. In all cases though both positions play an important part in asking difficult questions, pushing teams to make faster decisions (with data), and solving difficult cross-functional projects key to the company’s overall success.

In Part 2 we will dive further into the various reporting structures, career paths, & key benefits of Business Operations and Chiefs of Staff.‍

If you’re working in Business Operations or as a Chief of Staff, apply to join the BizOps Network or the Chief of Staff Network to connect and learn from other top leaders!

want to join the bizops network?

We are an invite only community welcoming new members who meet the following criteria.

You are currently in a BizOps or similar role