In my role as the PreSales leader at ServiceNow, I often get asked by people on our team how to be successful. I love this question, and although I don’t have all the answers, I am thrilled to share my journey.

When I think about my own journey into PreSales starting in 2001 and my accompanying move to leadership in 2005, I reflect back on a few of the key moments and learnings I have had along the way. Two pieces of advice that happen to be inter-connected come to mind. I always share these ideas with solution consultants (SCs) I speak with and try to help them think about how they can deploy them in their world today.

What are these two pieces of advice?

I have personally used both themes to enhance my own career over the years and believe that anyone in PreSales can do the same. I am not implying that anyone who executes on these two items automatically qualifies for a promotion. Rather, these pieces of advice can help folks in the PreSales world enhance their careers and line themselves up for whatever bigger roles they might want to tackle.

Be known for something

When I moved to the USA from Canada in the mid-90s, I worked at a company called GTE, which was the predecessor of Verizon. GTE had many connected businesses, all focusing on the telecommunications industry. One of these businesses was GTE Supply (GTES). GTES had two main business purposes: supply telecom equipment to their parent company GTE Telephone and sell telecom equipment, poles, cable, etc. to small and medium telcos across the country.

I was working on a supply chain application built to estimate inventory and shipping costs. For example, a customer in Utah might want to purchase 100 telephone poles. The system would try to determine which warehouse in the U.S. had the poles in stock and would be the closest and fastest place to ship them. This was way before Google Maps, therefore determining shipping distances was not an easy task. We used a third-party software program to figure it out, but it was never accurate, expensive to use, and slow to process requests.

One day I was thinking about the problem and happened to be sending a gift to some family members in New Jersey. I lived in Texas, and my zip code was 75056—theirs was 07556. This was also the mid-90s, and Beverly Hills, 90210 was still on TV—I loved that show. I got to thinking that night that it was interesting that zip codes on the East Coast were lower numbers than in Texas, and zip codes in California were greater than those in Texas. I had one of those “aha” moments and realized that zip codes went up from east to west. While this was not perfect, it was a fast and efficient way to determine which warehouse may be closest to a customer by subtracting their zip code from warehouses that carried the poles. The lowest differential is most likely the closest warehouse.

This simple algorithm saved GTE a lot of time, money, and effort. We did not need the third party to determine shipping distances. Customers could find out in one second if we had stock, what warehouse it would come from, and estimated shipping costs. This was huge.

You could say I was now “known” for this simple yet effective idea. This really helped propel my coding career from being just a guy who coded the specs to someone who would look at a problem in various ways and hopefully come up with unique but easy-to-understand solutions.

Be endearing to sales

Back in 2005, I joined a small software company called VMware. At the time, VMware had about 400 employees, and I was brought on to lead the south-central U.S. region with five PreSales people on the team. VMware was growing fast with an undeniable product, no competition, and a value proposition second to none. Demands on our time were incredible — we could not attend enough meetings per day, and any increase in efficiency within the sales cycle would improve our revenue significantly.

While I was a manager, I also had to act as “player coach.” Sales Executives would be so busy at times that I would occasionally have to fill in and give the pitch, demo, etc.

Oftentimes, we would secure the technical win early in the sales cycle. The challenge we faced was not “if” the customer would buy, but rather how much they would purchase. Most customers wanted to purchase 8–12 licenses. This meant we had to close a lot of deals to make our quota.

We had a sales rep in the Dallas area, David, who was by far the best in our region. He understood our value proposition, how to generate pipeline, and how to increase our deal velocity. The more customers we could talk to, the more revenue we could close in the quarter. But he also knew that if we could convince customers to purchase 20 licenses instead of the usual 8–12, we could blow out our numbers. David and I would talk about this challenge often until we both came up with a solution.

David had always talked about the benefits of our solution in terms of value, as well as the intangibles like more uptime, flexibility, etc. The intangibles were what excited the technical audience, but the financial incentives excited the buyers. We decided to combine the two. Eventually, David came up with a basic spreadsheet that would showcase how our software could save thousands in capital costs by negating the need to purchase new servers all the time.

Customers loved seeing this on paper. After a while, I studied the spreadsheet and its components. It was simple and basic, which I liked, but I knew if we added a few more items and made it slightly more flexible, we could take it to another level. Eventually, we added more details to the sheet and laminated it, which David would take on calls. We tested it with a few customers, and the results were amazing. They bought more software — and faster than ever before.

When I visited Austin, Houston, Denver, or Kansas City, I would bring my copy of the sheet. The sales reps in those cities were not used to selling like this, so I would walk through the details with the customers a few times and the reps saw how to use it, learned it, and became self-sufficient. It worked! Soon after, all five sales territories were using the “value” sheet we created, and our region was number one in the world that year.

The moral of the story is that I really wanted to make the sales process and our sales reps’ jobs easier. The value spreadsheet was one of those things that made sales look at PreSales and say “you all are more than just a technical bunch that does demos. You can add way more value!” By using the technical knowledge of how our software was deployed, with what it costs to deploy along with the benefits to the customer, we created a winning combination. This is what was endearing to sales. I was focused on making their job — as well as mine — easier.

How to do it

Being known for something and being endearing to sales is not easy, and trying to force it will undoubtedly fail. But you can be deliberate in this quest. Not everyone likes to intermix technology and financial acumen, and that is ok. But I am reminded of two SCs on my current team at ServiceNow — Lauren McManamon and Aurora Gaimon — both of whom embody the “be known for something” mentality in their own ways.

Lauren created an internal set of videos to explain our platform and its capabilities. These are produced in small clips called “shark bites.” They are an ingenious way to showcase the power of our platform. Even the sales team loves them (endearing to sales!).

Aurora is an SC in the Netherlands and has a YouTube channel called ValueTalk. On the channel, she covers small components of our business management technology and relates it to value—sound familiar?

Both women have taken complex technology, broken it down into easy-to-understand pieces, and tried to ensure that our salespeople and customers can understand the value proposition.

To get ahead and achieve the goals you want in this world, it takes a lot more than the advice I am showcasing here. It takes hard work, ingenuity, perseverance, and attitude. But, if you can make yourself stand out in the crowd (e.g., zip codes) and make someone’s job, especially salespeople, just a little easier (e.g., value sheet), I believe the sky is the limit.

Good luck in your own career, and let me know what you are known for! 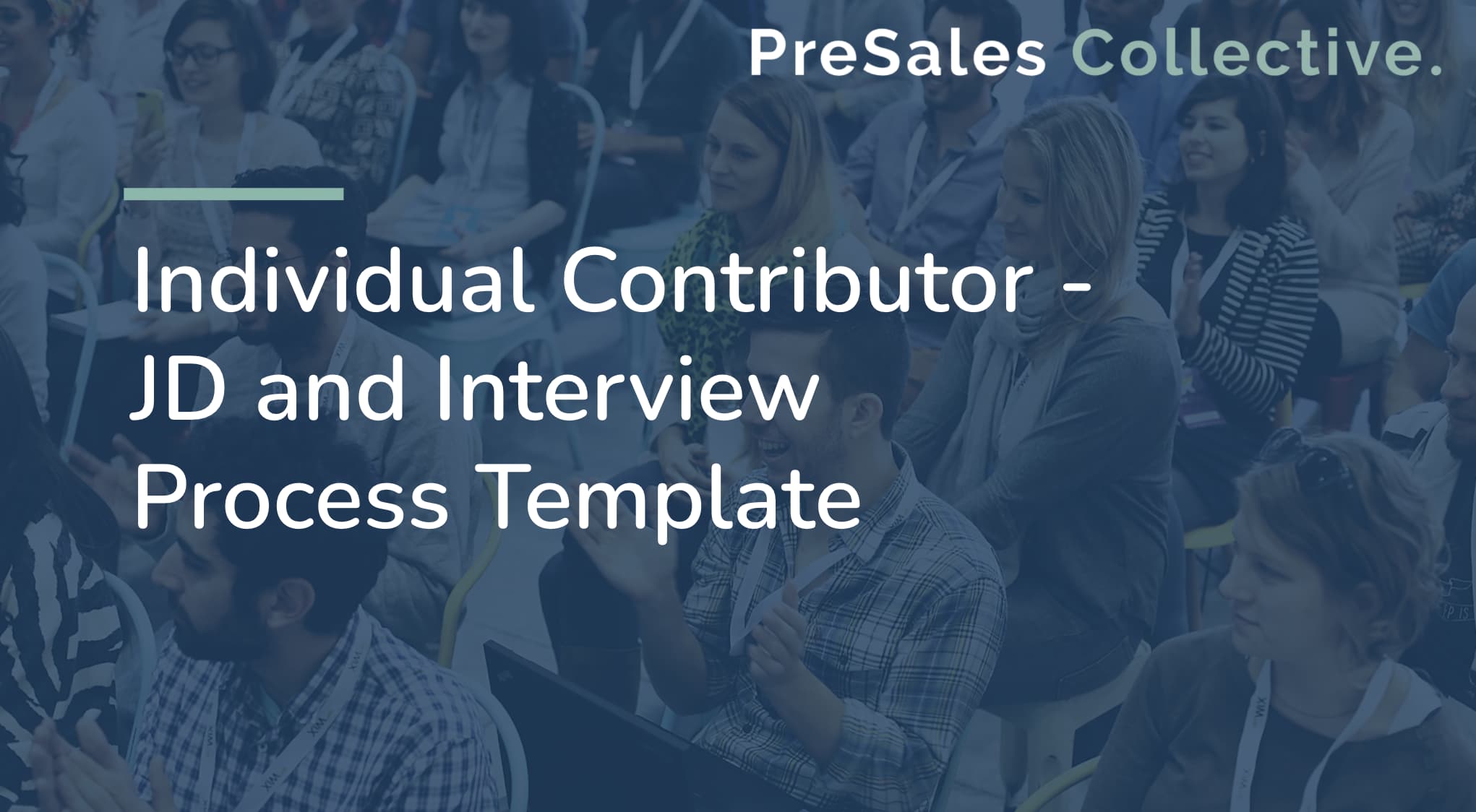 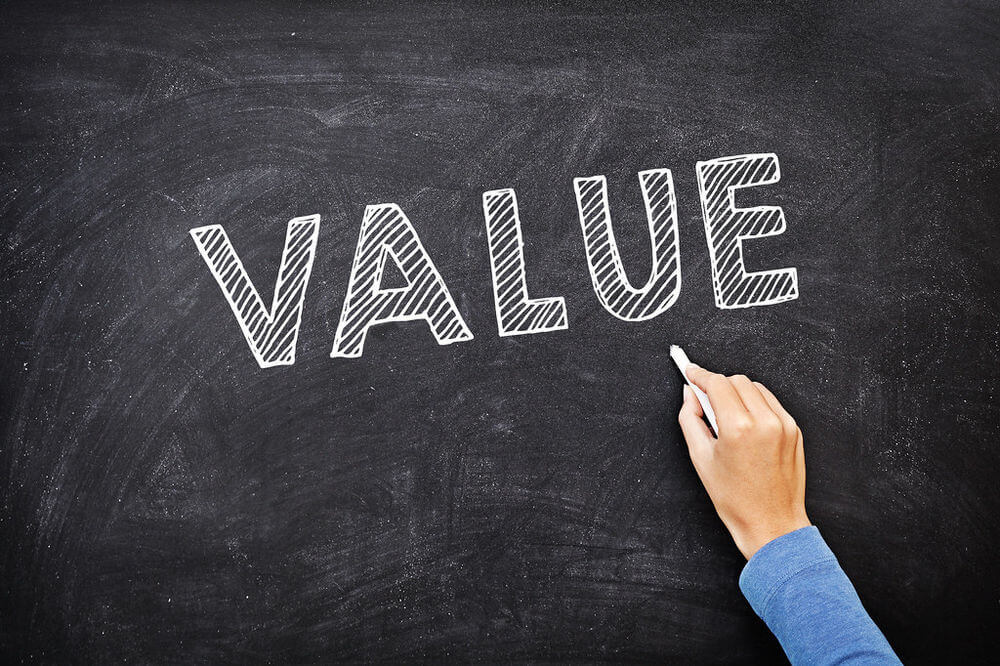 What is Value Consulting? 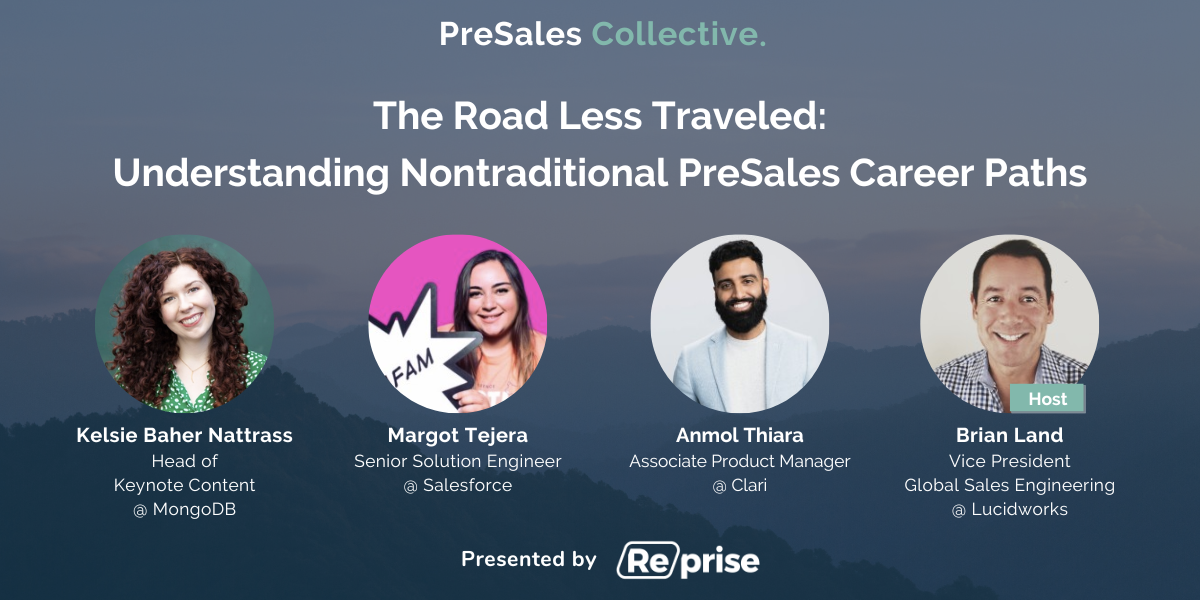 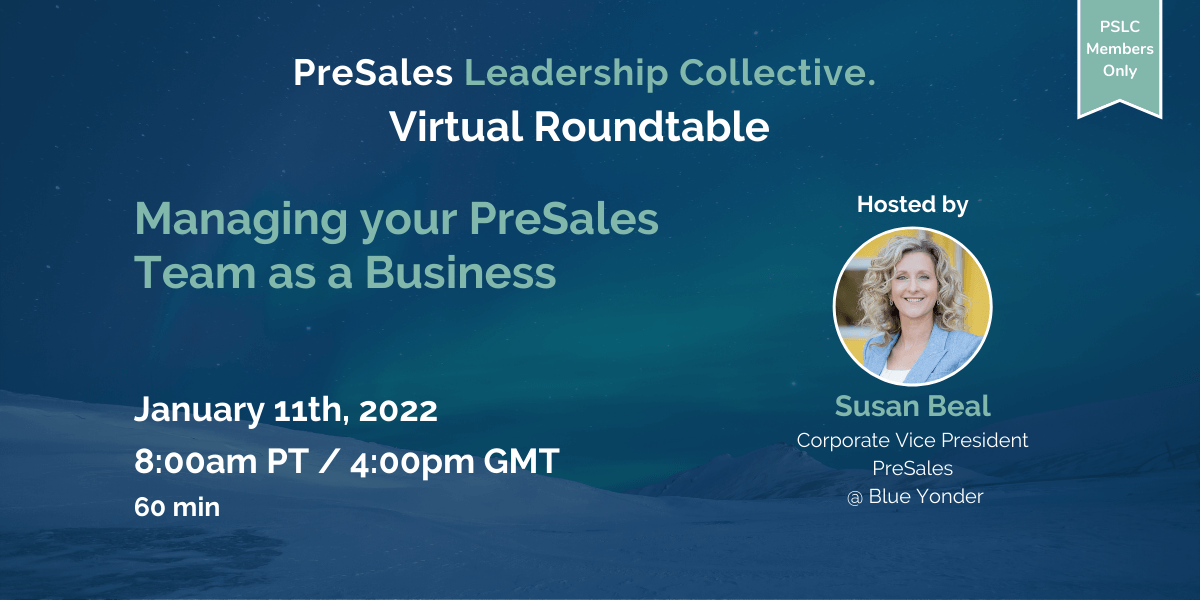 PSLC Roundtable: Managing your PreSales Team as a Business